We are delighted to welcome guest speaker Gareth Weetman (1995), who is now in his 21st year as a barrister specialising in criminal and personal injury cases. Gareth is instructed on behalf of the prosecution and defence, and has worked on trials spanning a wide spectrum of offences, from tax and complex fraud, through county lines drugs gangs and murders, to abuse cases involving child witnesses or historic allegations. Although he is based in London, at 7BR Chambers, he's always maintained a link to the Midlands, often appearing in courts throughout the region. He has recently been appointed to sit as a part- time Judge in family cases.

Gareth believes that his interest in public speaking was first forged in Levett, addressing the collected house on subjects as fascinating and cerebral as the merits of early '90s Batman movies and Aston Villa's back four. Whilst at University he was also President of the Cambridge Union and an award-winning debater and public speaker.

The Chief Master, Dr Katy Ricks will also be speaking, as will the School Captain, Emil Ali. 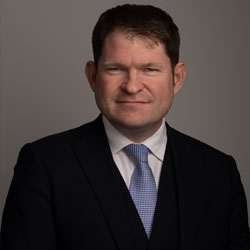 Booking for this event has now closed. If you are interested in attending please contact the Development Office at oldeds@kes.org.uk